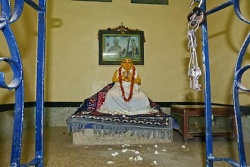 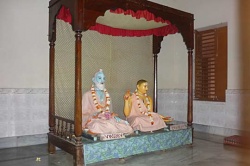 Srila Madhavendra Puri was of a very renounced mentality. He never asked anything from others, but whatever came to him, he accepted as the mercy of Krishna. He never begged for food, but he would accept whatever he required when it was given to him. If he didn’t receive anything at all, he would fast that day; but he would not go to anyone’s house for begging. That was his nature. He was always chanting the Name of Krishna. In this way, he circumambulated all over India, especially Vrndavan. Now, Mahaprabhu told his story to His devotees in Remuna.

Madhavendra Puri stayed there, and after that he departed the world at that very place of Remuna. We have seen there the Samadhi Temple of Srila Madhavendra Puri, a very small and charming Temple.