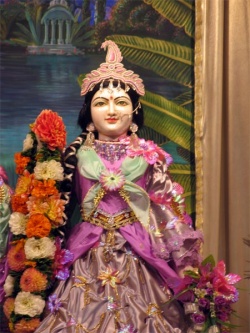 Radha (Radhika, Radharani) lit. ‘She whose worship is supreme’; Lord Krsna’s eternal consort, the embodiment of the highest service and sacrifice to the Lord; the female aspect of the Supreme Absolute Truth

One day, Vrsabhanu Raja, while at the River Yamuna, saw a small baby girl lying in a lotus flower. He was very surprised, and so he took that baby and gave Her to his wife, Mother Kirtida. When everyone heard, they were delighted that Maharaj Vrsabhanu and Mother Kirtida had got a daughter. Everyone believed that She was their daughter born from a lotus. That is the nature and devotional mood of the faithful plane.

Everyone worshipped Vrsabhanu Raja and Kirtida, praising them for their beautiful daughter, but She would not open Her eyes. Anyhow, within a few days, Mother Yasoda heard that Raja Vrsabhanu and Mother Kirtida had a nice newborn girl, and so, with baby Krishna, she came to see. When Mother Yasoda took that beautiful girl on her lap, Krishna also tried to see, and when Krishna was looking into the face of Radharani, She opened Her eyes for the very first time. Everyone was stunned and thought, «Oh, this boy is very auspicious, when He touched this girl, She opened Her eyes.» This was Her first darsan, the first meeting of the Power and the Powerful.

Then later, Radharani was growing up in the house of Maharaj Vrsabhanu, and She was very beautiful and very intelligent, and qualified in so many ways. Then one day, Rsi Durvasa came to the house of Maharaj Vrsabhanu, and Srimati Radharani cooked very nicely for him. Durvasa was so pleased with Her that he gave Her a boon that whatever She cooked would taste of ecstasy, and whoever will eat Her cooking will get a long life.

Mother Yasoda heard of that boon, so every day she would call Srimati Radharani to cook something for Krishna. Even after Srimati Radharani was married to Abhimanyu, She had an open invitation. She was so happy, and Abhimanyu was also very happy. Sometimes he is also taking that prasadam. This is nitya-lila.